C-list in the snow

Max here, waiting for the sun to come up so I can see how bad the balconies are and dig them out. We’ve been spotty getting back into posting the C-lists, here’s a summery of things we’ve posted on our Facebook page that are still relevant/current…

Item: Much as William Moulton Marston was in his day, Dr Will Brooker was tired of seeing female characters in pop culture that fell short of his ideals, overly relied on tight cloths, high heals and physical attributes. So he set out to invent a new icon. ‘My So-Called Secret Identity‘ [site is not up yet but their Facebook page is], drawn by Suze Shore, is the tale of Cat Abigail Daniels, the smartest person in Gloria City. She remembers everything she reads, sees how everything connects. And she’s getting tired of pretending, hiding, acting dumb to save other people’s feelings. If they won’t take her seriously as Catherine Abigail Daniels, the student and cop’s kid, maybe they’ll take her seriously in a costume. Looks pretty good, I like the primes and goals a lot.
Item: Due to the SNOW, Sherwin’s Toronto launch of Serial Villan has been postponed until March. He spent the evening playing video games in his hotel room. Sounds like his idea of a nice evening off!
Item:  In the bigger picture of north american comic, CNET posted “Bizarro world! Print comics boom as digital sales rise. The common wisdom is that as a medium goes digital, the physical sales plummet. But when it comes to comic books, the common wisdom needs a new guru.” – read the full story here.

Item:  On counterpoint to some extent, Robin at Inkstuds has a fantastic interview with teacher writer and comic artist Stephen Bissette. They talk for three hours, broken up into two parts about a lot of things. In all seriousness this is one of the best big picture views of the highs and lows of making comics today. Between his own time working at DC to his front row seat watching the current generation of creators he helps to train at CCS, If you want to make comics go listen to this. If you already make comics, go listen. If you gave up, yeah, go listen. Part 1 – Part 2.
Item: In Afin de subventionner adéquatement les auteurs, “To adequately subsidize authors”, du Journal Montréal’s DB blogger Jean-Dominic Leduc posted last month about the so far unsuccessful attempts of Voro to get backing for a comics project relating to the province of Quebec. The post is mostly an open letter to ACC & CALQ, requesting an increase in funding of their grants for the medium. Check it out, and if you’re a fan or practitioner of comics in Quebec, consider writing your own letter, emails are provided in the post. More funding for comics! It’s a good idea. More posts by Jean-Dominic can be found here. 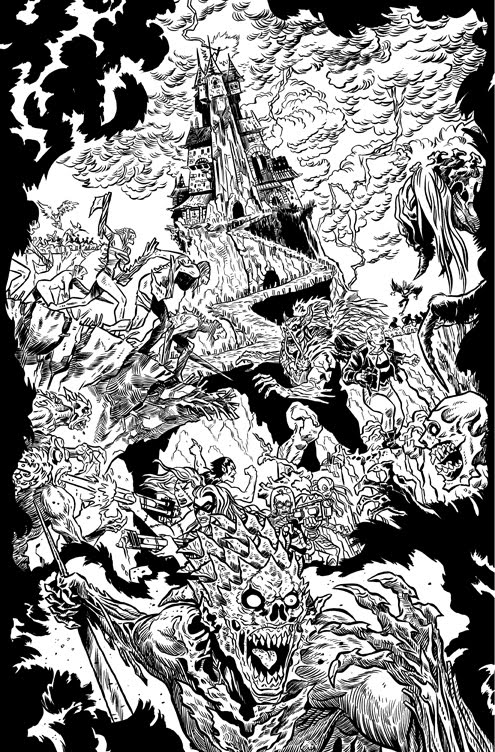 Item: Thumbs up review here from CBR for the big finally of the Rotoworld storyline, and Andy Belanger’s first DCU story/job. I had the pleasure of reading it a day early while scanning some old art and suffering a sugar crash. I haven’t been following the books so it was a bit of being dropped smack in the middle of madness, Andy should have played me some of his metal i think!  Would have gone well with this.  Art is good stuff, solid as always. Colors a bit heavy handed, did not help in distinguishing the detail in Andy’s stuff. First are always a little disappointing. I’ll bet they had to be done in a week or something. Crazy. Yanick Paquette’s Cover art looks really nice on the review site, unfortunate about the ‘graphics’ on the printed edition. Congrats for a very respectable first DC headliner Andy!
Item: Editions TRIP are proud to announce they will publish Billy Mavreas latest book : TIBONOM, 80 amazing pages of wordless comics for all ages. Featuring an introduction by, Joe Ollmann.
Item: Kevin A. Boyd on the Shuster blog posted this link to an article for the Hamilton Spectator, about Aram Alexanian’s contributions to Canadian and American Golden Age Comics before he went to work for the family carpet business. It includes a discussion of the Canadian Whites Walter Durajlija & Ivan Koczmarek.
Item[s]:  A positive review of Salgood Sam’s [yes that’s me!] Revolver Quarterly, from Rachel Fenton, a reader of the digital edition in New Zealand. All places equal distant on the internet. Éric Thériault has a new facebook page to like,  Jai Granofsky posted some fun new doodles on his blog, George Todorovski posted a cool ‘Regulators’ trailer for Visionary Comics; A comic he worked on “a while back”.  Kalman Andrasofszky joined a collective! This is from their most recent show. Sleeping Lion Heart. Acrylic and silver leaf on wood. 3’x4′ – with the plywood collective for their “HEROES” exhibit. Ramon Perez sightings at Angouleme! Here and here. Having fun doing a victory lap in the EU. Check out this cool set of photos by and of David Boswell: Cartoonist, Photographer, Illustrator, Jaded Roué. Oh hey, it’s the Comic Book Lounge’s 1st Anniversary Minicon and Industry Night today! Congratulations guys!
Ok, sun is up, time for some food and morning exercise! Keep up with us on our facebook page here.