The C-List: Let's Try to Get One or Two More of These In Before the Year Ends 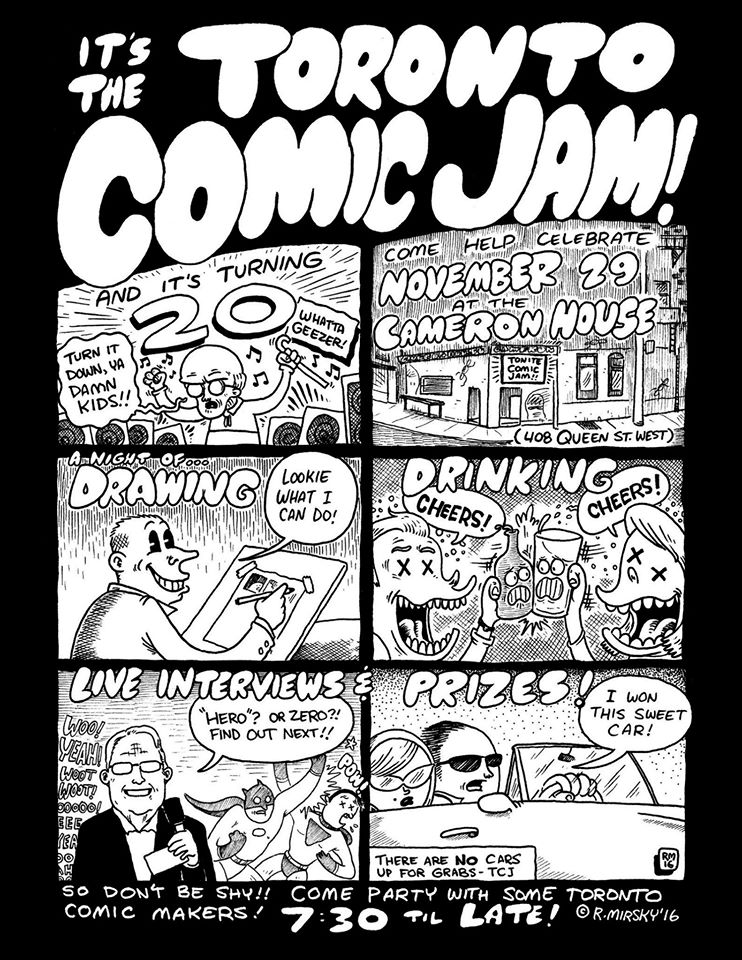 The C-List Returns! News from the World of Canadian Comics

by BK Munn
It’s been a while since we’ve posted one of these news round-ups. We’ve been lazy, preferring to share things on our Facebook page rather than take the few minutes to cut-and-paste some links into the old blog here. But I happen to have a few spare moments right now –I’m currently taking a break from ranting about the U.S. election on social media and reading old comics books under the covers– so here we go with the news!
Item! The Toronto Comics Jam is celebrating its 20th anniversary with a celebration on November 29. Congrats to the whole crew of jammers, past and present! As you can see from Robb Mirsky‘s excellent poster above, the event will include some nostalgic interviews and prize-giving, among other joys. Check out the Facebook event page here.
Item! Toronto radio personality Fearless Fred Kennedy is interviewed by Geek.com about the epic sci-fi comic book he is writing for Chapterhouse Books, The Fourth Planet. The series is drawn by Miko Maciaszek. Kennedy has some thoughts on the future of serialized comics: “I follow creators more than I do anything else, really. I did that Ryan Browne, from Gods Hates Astronauts and Blast Furnace, and I love him, his books are hysterical. I’m also definitely more a trades guy at this point. When I have time to read, I normally have a few hours, and I just want to read all the way through. Binge reader, for sure. I feel as if comics are moving more in that direction anyhow, with shorter, more condensed arcs. It’s all very BBC, the way it is formatted.”
Item! A Calgary charity has turned its annual report on childhood trauma and abuse into a graphic novel: “George Ghitan, executive director of Hull Services, said every year their annual report goes out, stakeholders see the same things: business jargon, numbers and an endless assortment of data.
Teaming up with a design student from Alberta College of Art and Design (ACAD), Ghitan said they transformed this year’s annual report into a graphic novel in the hopes of connecting with readers on a more emotional level.
“With annual reports often people skim through it and that’s it,” Ghitan explained.
“We wanted our audiences to get a feel for what it’s like for these kids who are terribly abused and neglected. I’ve had people tell me they’ve read this all the way through and couldn’t put it down.”
The story follows a 15-year-old girl named Callie, and depicts her experience suffering sexual abuse from her mother’s new boyfriend. With her parents dubbing her outbursts as typical teenage behaviour, Callie slowly sinks into a serious depression and turns to self-inflicted harm to cope.”
Item! Over at comicbookdaily.com, Walter Durajlija gives a detailed report on the Shuster Awards ceremony that took place last week at the Forest City Comicon in London, ON, and gives a shout-out to erstwhile Sequential contributor Rob Pincombe: “Robert Pincombe had the honor of inducting his friend Fred Kelly into the Hall of Fame. Kelly, though late coming onto the Bell Features scene, certainly made an impact with his creation of swashbuckler The Blade in Joke Comics quickly followed by characters such as Steve Storms, Betty Burd, Clip Curtis, Cinder Smith and standout Doc Stearne who, in the last panel of his last adventure, became Mr. Monster and with the help of Michael T. Gilbert forty years after the fact, became Fred Kelly’s most enduring legacy. Present to accept the Award were Fred Kelly’s widow, Rita, and grandson, Robert. It was thrilling to see and meet more family members of these great Canadian war-time comic creators.”

Item! Cartoonist Meags Fitzgerald recently shared the details of the next evolution of her Conundrum Press-published autobio graphic novel: “I’ve got a little bit of exciting news! The wonderful Pow Pow Press will be publishing a French translation of Long Red Hair as Soyeux Cheveux Roux, to debut at TCAF in May!
Pow Pow Press has been very active lately with a crowdsourced program of translating its own French-language comics into English. This is the first English-to-French translation I think they’ve committed to. Pow Pow publisher Luc Bossé was recently interviewed by Philippe LeBlanc of The Beat about the genesis of his translation urge:
“It’s a precise moment I still remember. I was at the Festival de Bande Dessinée de Québec and I was talking with another cartoonist from France. He said he really liked Vile et Miserable and we got to talking about entering the European market. He said that the book might be too hard for the French public and that the book might have to be translated in a cleaner European French. It really irritated me that people would think I’d need to translate a book from French to French. It’s nonsensical. There’s regionalism in Canada for sure, but we don’t translate European French books to Canadian French. We take the original version and read it, warts and all. We just figured, maybe the English market would be easier. Zviane and Samuel thought it was a great idea so we went ahead with it.
Being in Montreal means that a lot of events such as Expozine and MCAF are mostly bilingual so there was a proximity that made English easier than crossing the Atlantic. My opinion has changed since, but at the time, it made the most sense. I thought we could become a bilingual publisher and do our books in French and English.”
Item! On the occasion of Remembrance Day, cartoonist Ronn Sutton recently shared his contribution to a new comic, Victims of War, written by retired Colonel Pat B. Stogran: “The Old Vet, an apparition from the history and tradition of service, faith and loyalty, explains the implications of Canada’s military adventurism vis-a-vis the families of veterans. All too often, mainstream Canadians will express their heartfelt compassion for their veterans, while the co-lateral damage that is caused to the families of our casualties is but a fleeting expression of sympathy. Victims of War demonstrates how the deleterious effects of military operations impacts more seriously and broadly than the immediate casualties, and the harm done carries on for generations. Based on true stories related to the author in his capacity as Veterans Ombudsman, the characters and detailed detailed storyline are purely fictional; however, the gravity of the situation should be considered a fair reflection of the tragic circumstances some Canadians find themselves in. The publication draws attention to the lack of integrity of political leaders when it comes to following through on commitments, moral and legal, arising from their decision to use of military force.”
Item! Finally, The Comics Journal’s Rob Clough delves into Mark Laliberte’s Four Panel anthology, which features contributions from Laliberte, Jesse Jacobs, Anuj Shrestha, and surrealist genius Marc Connery: “The third entry is Mark Connery’s black and white lunacy, featuring many of the characters from his long-running series Rudy. Connery’s strips have always mixed absurdism, wordplay, eye-pops, collage and good old-fashioned comic strip fundamentals. That said, it’s not unusual for him to use an open-page layout in addition to a standard three- or four-panel layout, so it is odd to see such a rigid format for him on page after page. His response is to use the strip titles as something for the visuals to bounce off of, either as a punchline of sorts or at least a referent. That referent doesn’t have to make sense, other than staying within the internal logic of the strip, like “Eternal Combustion” being both a pun and a way to understand the quasi-abstract images in the panel. In some of the strips, there’s a definite punchline in the sense of how it should function in the context of the panel, only its actual connection to the events of the strip are tenuous at best. It’s most certainly not random, but it is deliberately disorienting.”